Moving along the Middle.

We took our time before setting off this morning, but we were still underway by 0930. 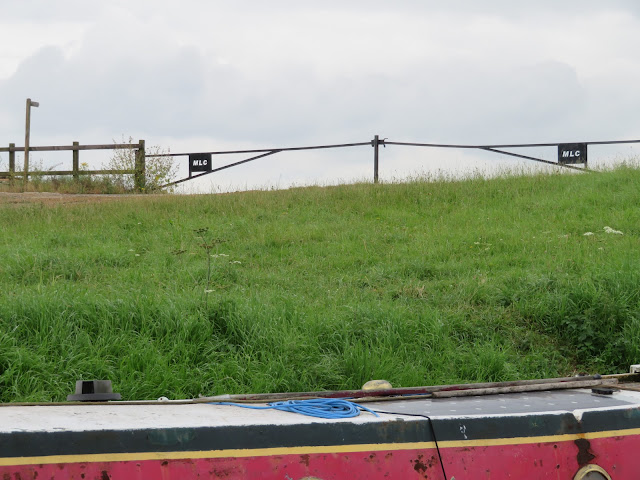 The Middle Level Commissioners like to publicise, or claim their property as well as the next man. 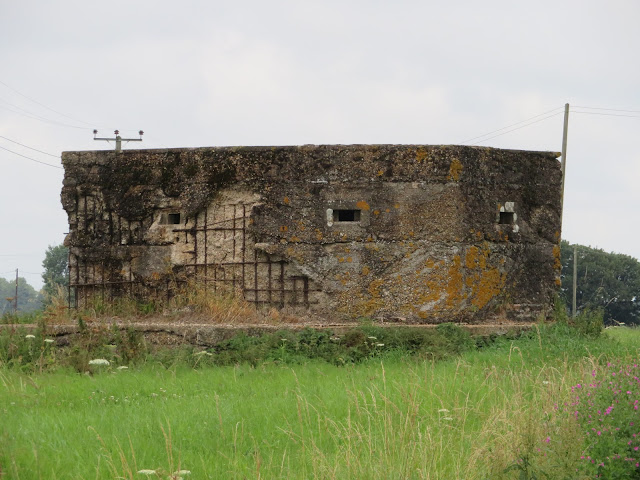 The channels of the Middle Levels may have been heaven sent as as an obstacle to any advancing invasion force. There are many pill boxes still existing in the area. I took this photo as it gives you some idea of the hurried construction of them. The reinforcing steel is not regular and the concrete could not have been of the correct mix, or thick enough I reckon. 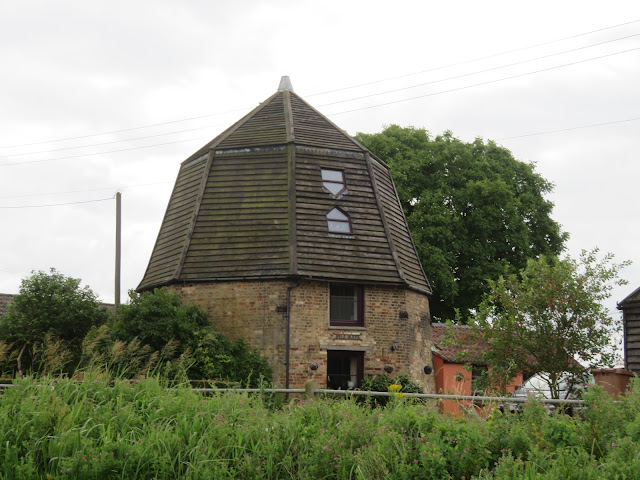 As we approached Nordelph we saw another of the octagonal buildings that were the old wind pumps that drained the fens.. It is still with us as it has been converted to a house. It would be no use to convert to a steam pump housing, when they took over, as it would be too small. 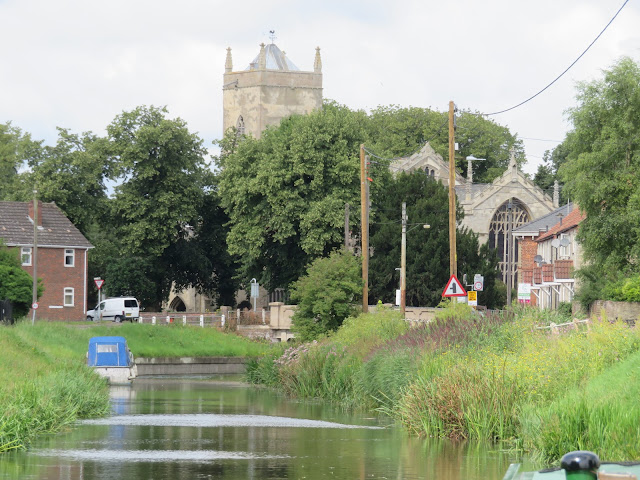 St. Clements Church makes a fine view as you approach Outwell. St. Clements was the fourth pope in the 900's.  He was martyred by being tied to an anchor and thrown into the sea! He is said to be the patron saint of seamen (which I have never heard before, and seems quite illogical) and of metal workers and blacksmiths! His saints day is 23rd November.  There is a sharp bend just past the church and a quite wide bridge that created a wind tunnel effect so I nearly didn't manage to make the turn to pass under it. There is a mooring just on the apex of the bend so we stopped for just enough time for Helen to run up the road to get the Sunday paper. 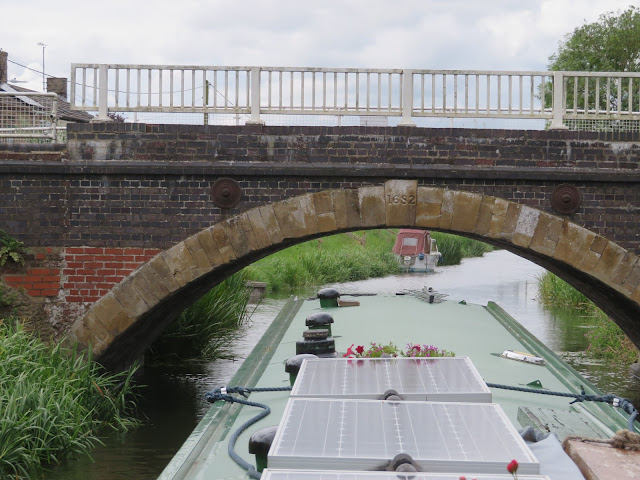 The bridge in Outwell, just by the Crown pub, has a date on the key stone of 1682. The numbers don't look weathered enough to me, and the bridge has certainly been altered. A bridge would almost certainly have been built then as that is when the town was developing. 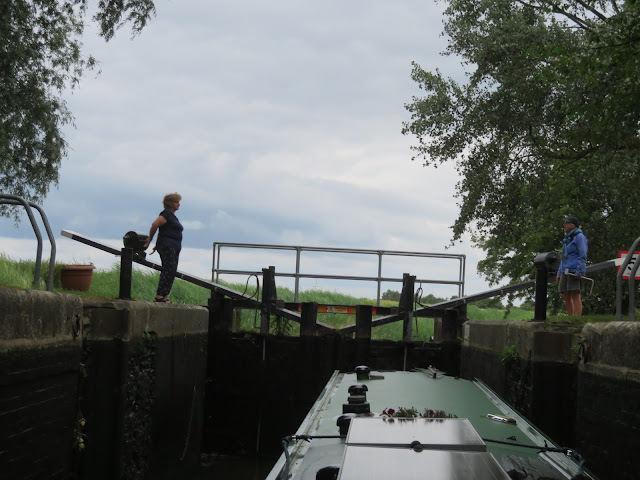 Having phoned ahead Maureen was out and about bring a Fox's hire boat through the lock. We went straight in and started on our way down. A day boat from Fox's arrived at the bottom of the lock and had some trouble getting on the landing in the window. Maureen and her husband had a whole fund of stories they regaled us with in the short time that we lowered down to the new level and went on our way. 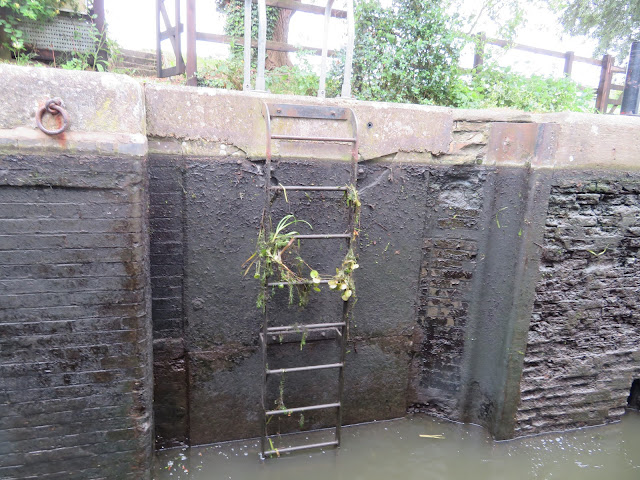 I noticed that the this lock, Marmont Priory, had been lengthened considerable at some time as the recess where the lock ladder was, was actually the recess for a previous gate. I am assuming this was when the Old Nene and Well Creek were designated the link route between the Nene and Great Ouse. 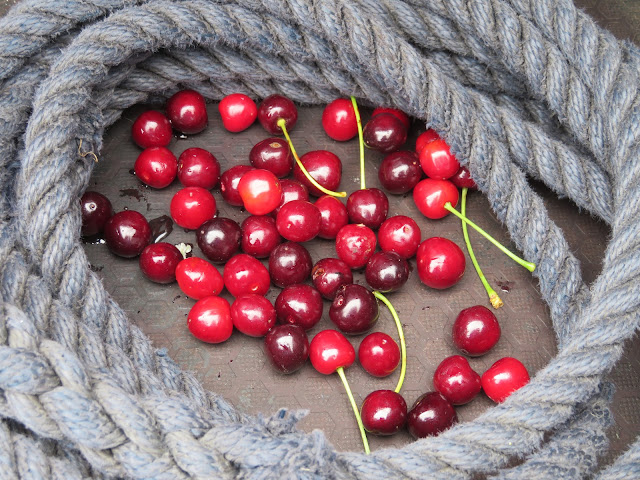 Whilst in the lock I was able to pick a few handfuls of cherries from a tree that overhung the east end of the lock. They made a great snack on the way to March. 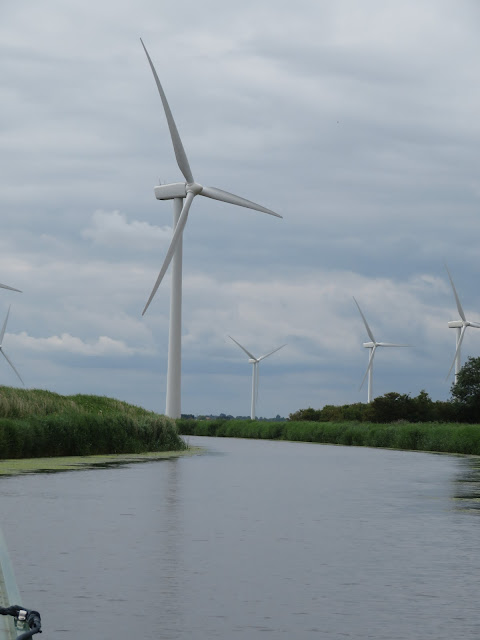 After leaving Salter's Lode Lock Well Creek was narrow and shallow, much like a canal, but soon after the Marmont Lock you are on the old course of the River Nene and it is wide and deep again. The weed hasn't been a problem on this stretch, but there are clumps of weed that should be avoided. The land is perfect for the wind turbines and they were certainly busy today. 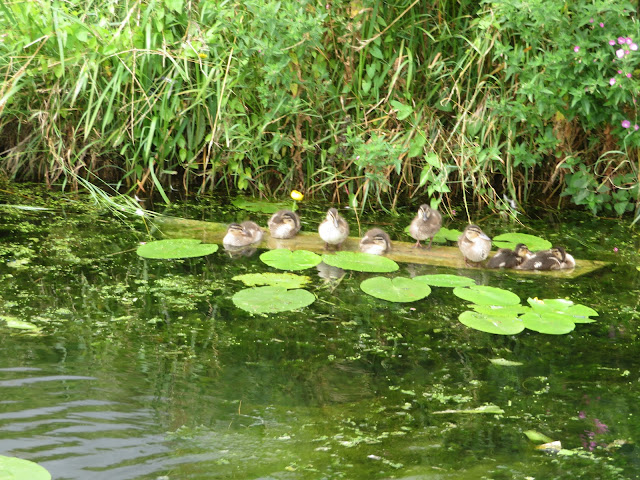 These ducklings were taking it easy on a floating plank and weren't at all disturbed by us passing. 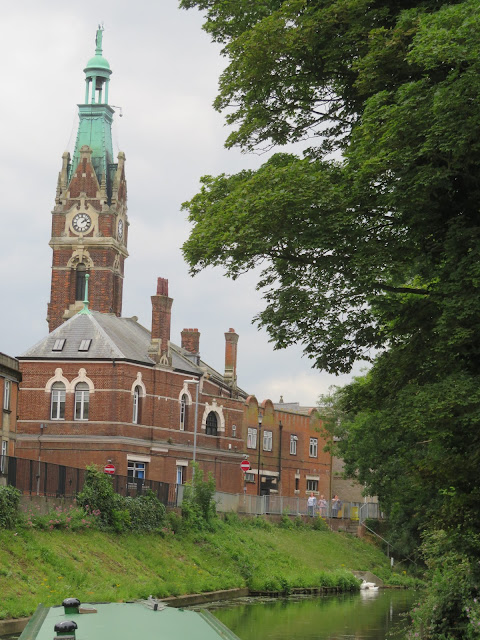 As we approached the outskirts of March there was a bloke poling his 40' narrow boat along with difficulty. When I enquired whether he was having trouble he just said it was an every day occurrence and refused our help. The mooring in the centre of March is heralded by the magnificent tower of the Town Hall. 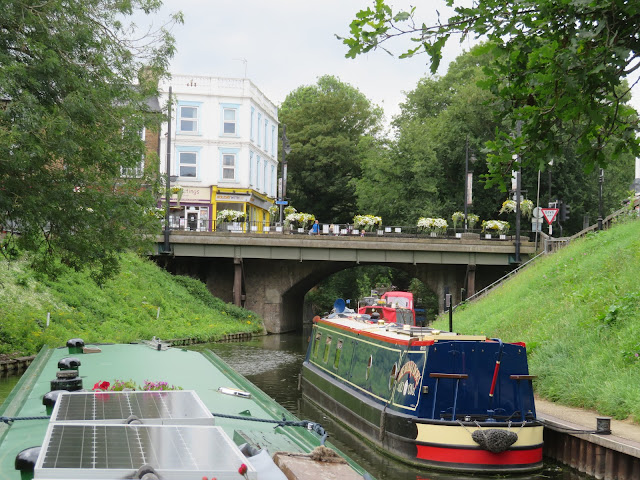 The moorings are just round the corner from the photo of the Town Hall, and  as things were there was room for us to squeeze on to them. However we had booked into Fox's Marina just in case there was no room for us, as I was catching the train home the next morning and so need to be moored there anyway. 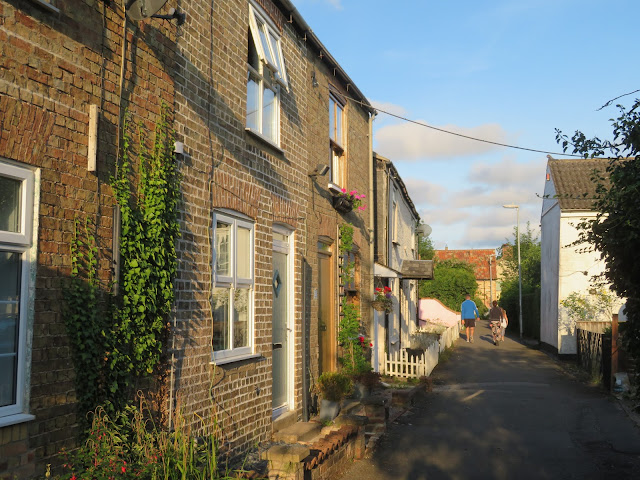 We were soon moored up in thre eastern basin at Fox's and as a treat we decided that we would head into town and eat at the Hippodrome. The walk from the marina passes under the main road and connects with the very nice lane that heads into town called West End. There is a real mix of very old and very new houses but the 'street' is barely wide enough for a car, yet there are garages and parking places by some of the houses. I expect there is a 'code of conduct' about when a car meets another.

We were just intime for the last twenty overs of Englands innings in the One Day Cricket World Cup Final and all the excitement that came with that. The cricket was on one side and the Men's Wimbledon tennis final was on the other. There were more people watching the cricket.

The next day I caught the train from March station, that used to be a very important junction and had seven passenger platforms and large marshalling yards. I prison has been built on part of them but there is still a ballast washing and concrete sleeper crushing plant, plus a workshop for working on trains. We were soon in Peterborough and then with no stops changed at Doncaster for the Hull trains. As soon as I got home I picked up the car and headed back to the boat. It actually took me longer to get back driving than on the train. It will be a week before we are back now. See you then.