Getting some sun and steps in!

The sun didn't rise until about 0800 and we were off by about 30 mins later. We had an appointment to keep. 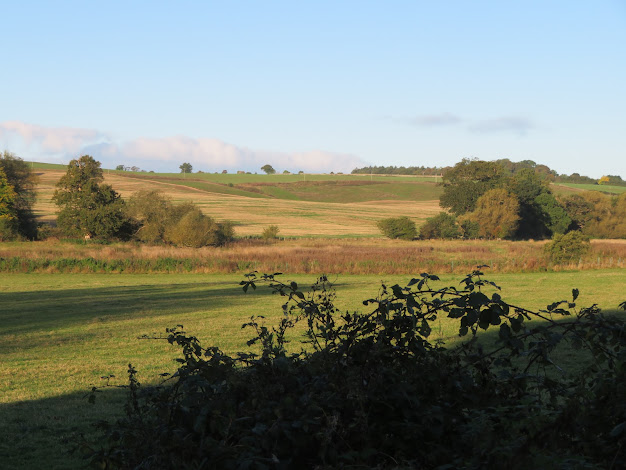 I have always loved autumn and I'm sure it is something about the light that just makes things so beautiful, almost soft focus. I took several pictures just to capture the light on the scenery, but I'm not a good photographer. Mind you I have it in my minds eye and I can remember walks and trips at this time of year when despite the cold, the sun on your back is really warming. 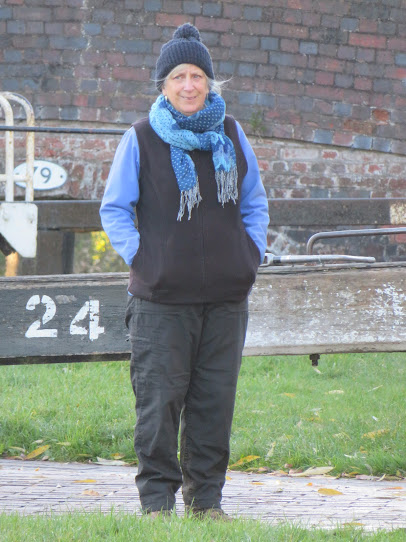 Helen was m not quite at maximum levels of tog and layers but she was taking no risks! 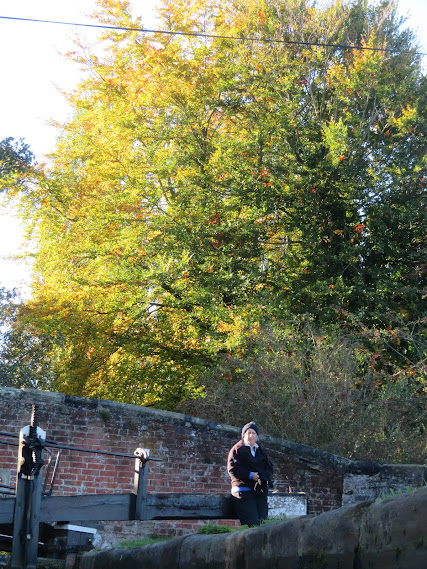 The wind picked up a little and another layer came out. Look at the sun on that tree! 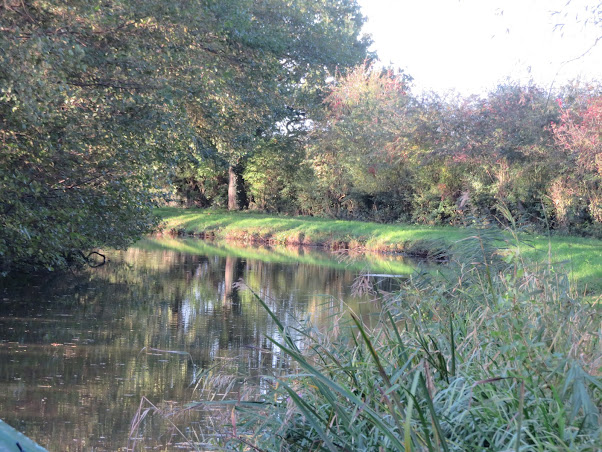 The light reminds me of an African twilight and manages to make a canal and a few hedges look romantic. 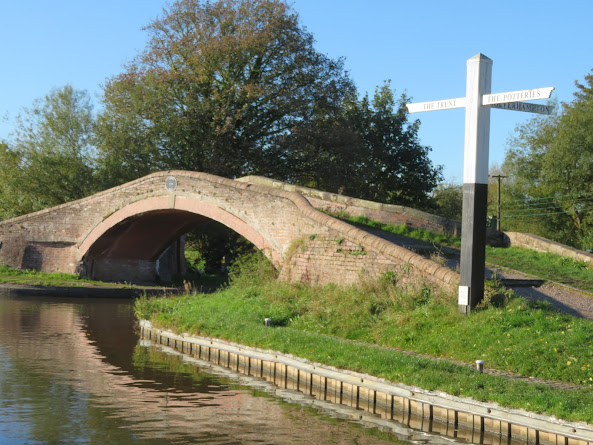 Great Hayward Junction was the point that we started to meet more boats but nothing too bad at all. Wouldn't it look much better if the structure was painted white? 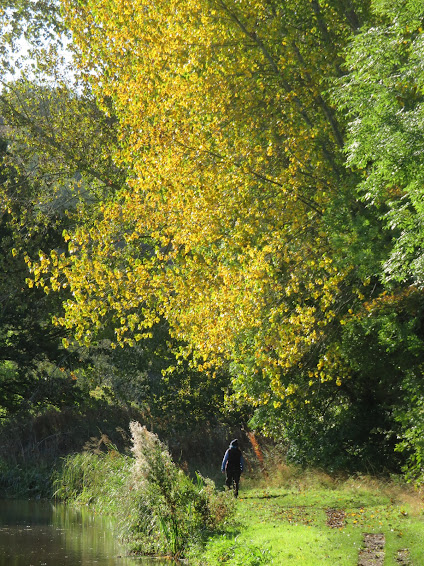 There were four boats waiting at the bottom of Colwich Lock, our last of the trip. Obviously Helen's computer thing had been talking to her as she decided to go off for a walk along the tow path to get her 'steps in'. 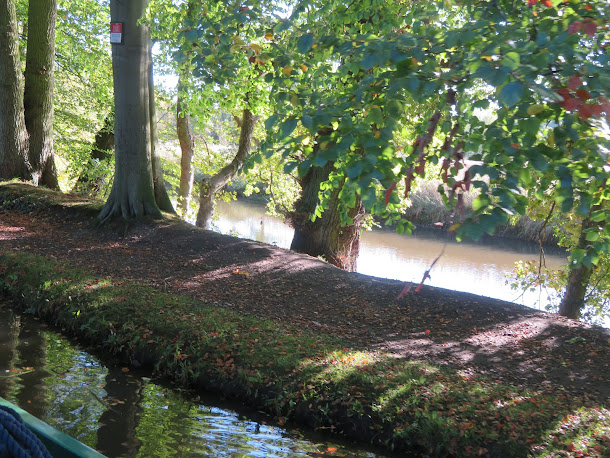 She walked to Wolsey Bridge and just through the bridge and along side the big house the River Trent was easy to spot now that the scrub has died back a bit and the leaves have fallen a little. 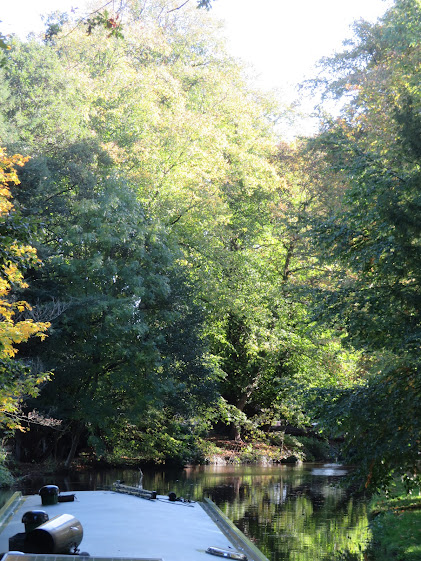 As  the canal approaches the Taft the trees hold sway until the disappear and the horizon open up to the railway and the hills of Cannock Chase. 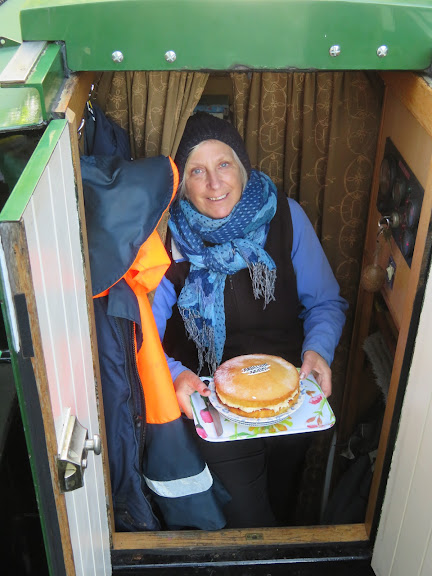 And here she is with a cup of tea and my birthday cake, Victoria Sponge, as requested, made by her own fair hand. When we were in Morrison's in Stone they had a Victoria Sponge with real cream, and twice the diameter for £4!! That is ridiculous, and Helen's was absolutely superb too. It is a good job it is not your birthday every day whilst Helen's computer would be working over time telling her to get her 'steps in'. 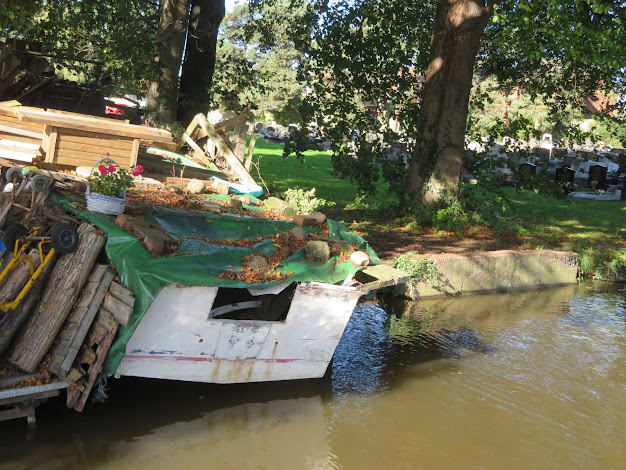 This old wooden cruiser at the bottom of a garden on the outskirts of Rugeley is pulled up almost out of the water. The graveyard of the church is next door. Some who appropriate. 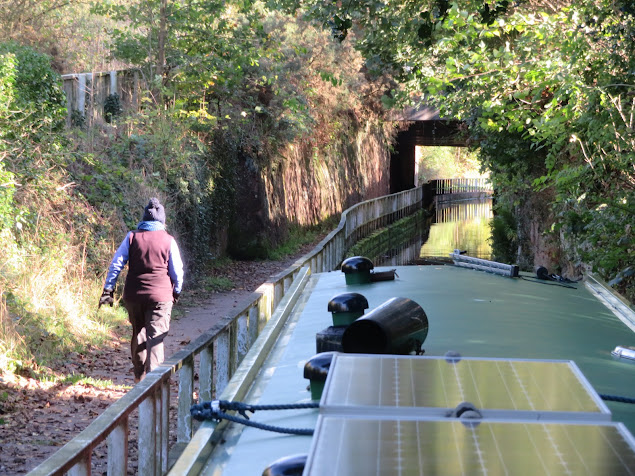 She is off again! You can see right to the end of the tunnel travelling in this direction, but coming the other way there is a bend before you get to the tunnel. That watch is at it again and she was off to get the 'steps in'.
I wanted to get back to Kings Bromley in good time to ensure I could fill up with fuel. As it turns out we had few delays and there were less boats moored than normal. Pearson's says it takes four hours from Great Hayward, but our experience is it is closer to five. As it was there were two other boats waiting for fuel so it was 1500 by the time we were back on our moorings. I decided that I would then wash the boat before it got dark as it was such a good afternoon. That is another property of low level sun light, it shows all the much on the boat up. It certainly looked loads better for doing. We then hopped into the car to Alrewas to meet our favourite Lock keeper and his Mum for a meal at the George and Dragon. It was lovely catching up and seeing his Mum so well too. I got birthday presents too!! Did you know that the volunteer lock keepers finish for the winter soon. He had been on at Fradley in the morning and only had two boats come through. He went home at 11am. All in all a very satisfactory birthday, and another years boating done I suspect.
Posted by NB Holderness at 10:55

Big hugs to you both, M&D xxoo

Thanks. It already seems a long time ago! She is a great baker I have to admit.
I hope you have a great time running around in the van and enjoying the spring/summer down there.

Cheers for now, Tony and Helen.