A bit about Bugsworth.

We had a walk into Whaley Bridge, via Tesco's after we had moored up and had a cup of tea. 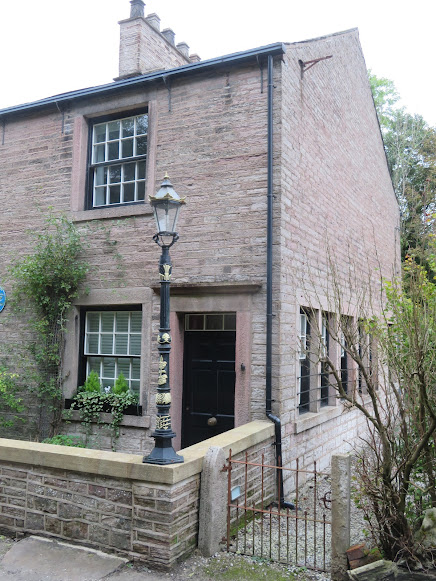 Just at the entrance to the basin is the wharf managers house and toll office. I was drawn to the line of windows, like a corridor on the east side. Some of them have bars on. I wondered if this was the toll office and where money changed hands so was kept secure 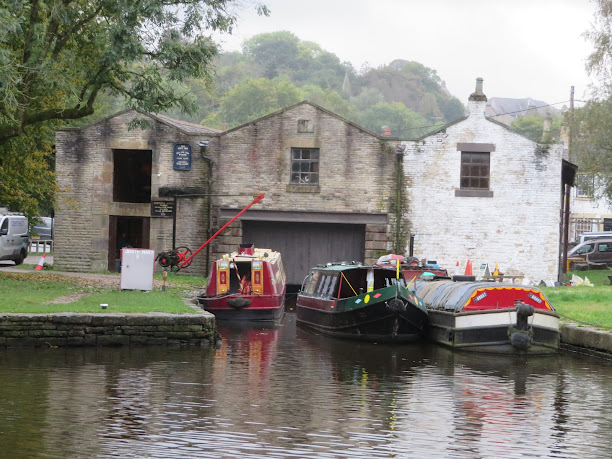 At the end of the canal at Whaley is the transshipment warehouse. You can see that there is a berth actually in the shed for loading undercover. The warehouse was built in 1801 and was originally three stories. 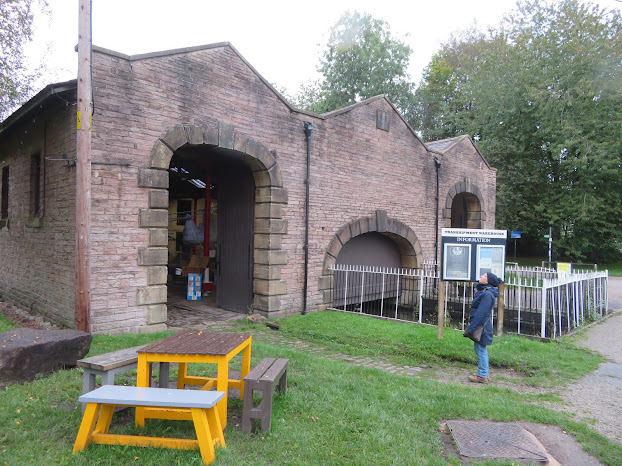 You can see at the other end that when the railway arrived at Whaley Bridge, from Cromford it was extended and the big doors on either side of the water allowed railway wagons in to transfer goods to/from the water in the dry too. The 3rd floor was removed in 1915 and trade died quickly when the tram way bringing limestone to Bugsworth etc. In the 1970/80's it was used as a hire base and as a boat fitters too. Various plans were made over the years that didn't come to anything but recently with grants from the local Council and C&RT have re-roofed the building and made it watertight and secure. It will now be used by a voluntary group called the High Peak Heritage Craft Centre and will be the site of courses in such as pottery weaving, silver-smithing etc etc. 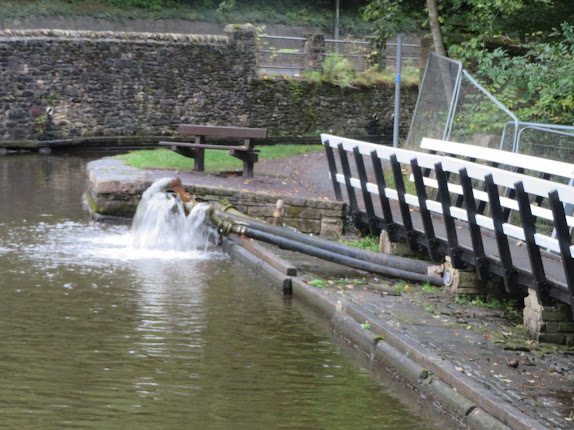 Tod brook Reservoir had a lot of trouble the other year and there was a chance that it could have breached and flown down the valley. Fortunately that didn't happen, but it had to be drained and as it was one of the main providers of water for the Peak Forest Canal this causes problems with water levels. It seems that they are pumping water up from the River Goyt to keep the levels acceptable. 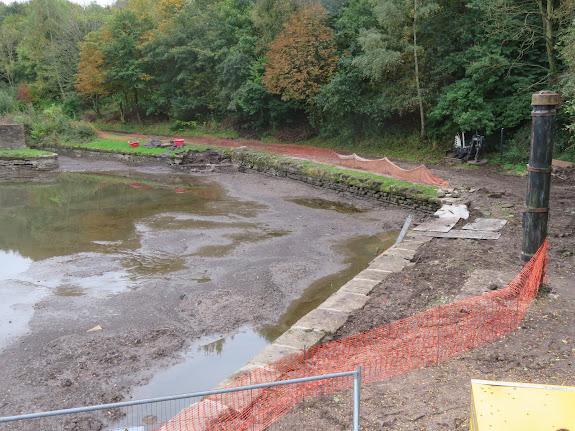 Currently the Upper Bssin  is closed and drained as they are repairing a wash wall. It was opened in 1796 so maybe is ready for a bit of TLC. It is supposed to reopen in December. On the right you can see the remains of a crane upright. 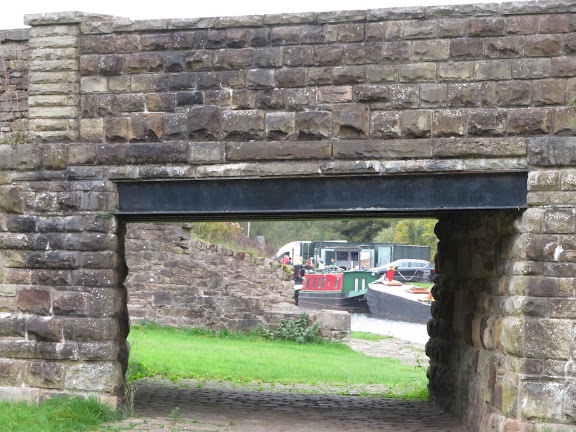 Looking through the bridge from the Middle Basin to the Lower Basin and with 'Holderness' moored up. 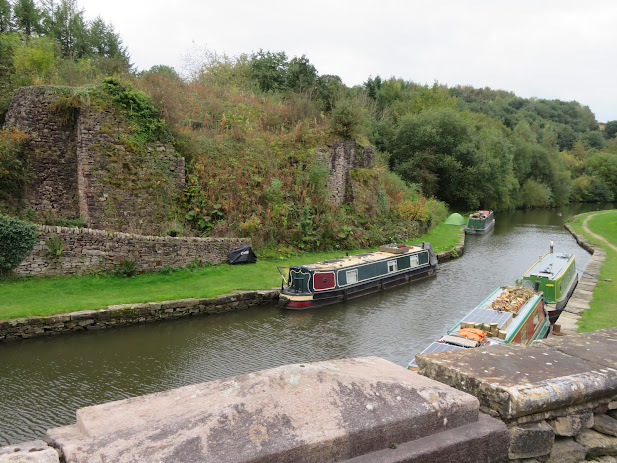 On the far side of the Middle Basin ar the Gnat Hole lime kilns. There were two lots of four here and one bank of four were destroyed when the bypass was built in the 1980's. It must have been an awful place to work with the smoke and smell and the dangers of the burned lime to the skin etc. 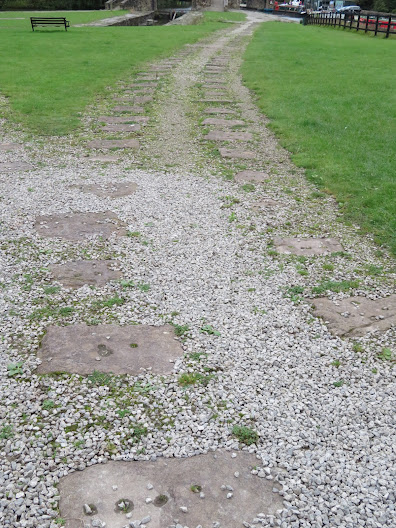 Bugsworth Basin was built at the end of a tramway from Dove Holes Quarries to export the limestone quarried there. It was a round 6 miles long and descended about 380 ft. It was a track of 4'2" gauge and had two inclined planes. It was a superb feat of engineering designed by Benjamin Outram and opened in 1796. Above you can see the sleeper blocks that the pedestals or saddles were bolted down to as the ran along the basin. 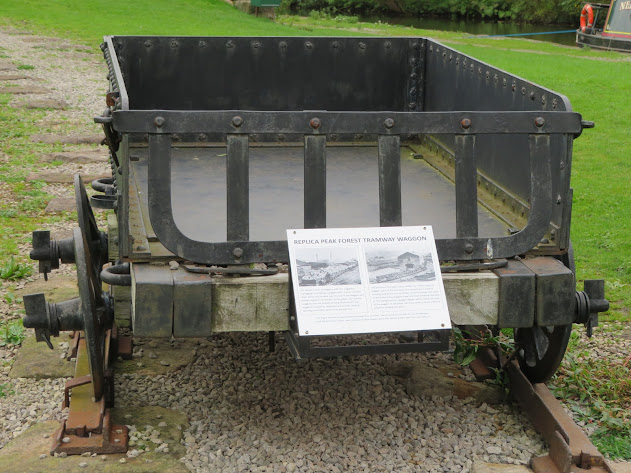 This is a replica of the wagons that were used. They carried a little over 2 tons and the gate on the front here was to allow them to be discharged using a tippler on a turntable. 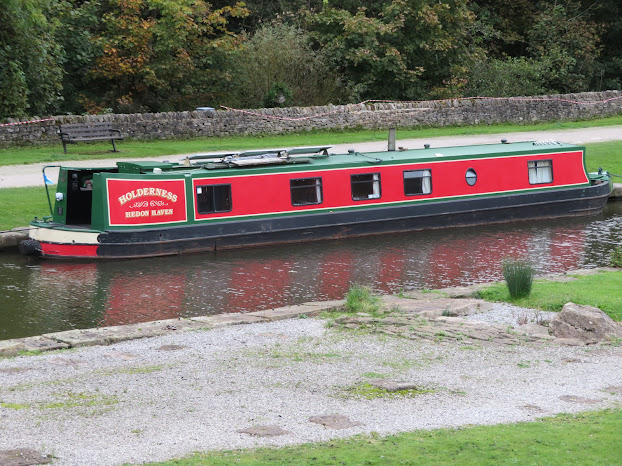 'Holderness' not looking too bad from this distance, but doesn't warrant closer inspection. There is a constant procession of dog walkers in and around the basin so it it always seems busy. There is a cafe boat at the entrance that also houses the warden. 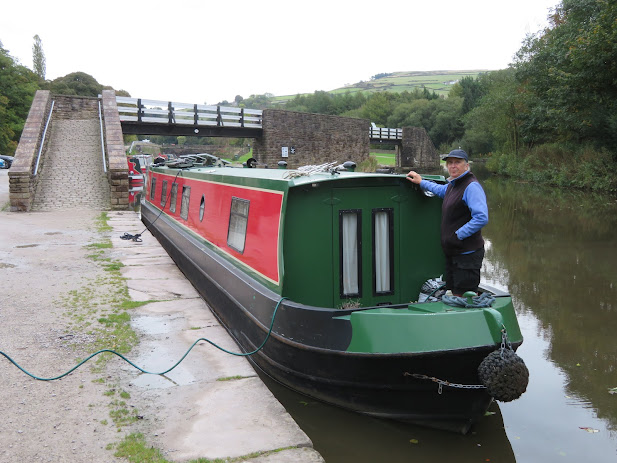 Here we are filling up with water and dumping the rubbish at the entrance.
Posted by NB Holderness at 18:57

A few years back I hired the dayboat 'Phoenix' from Whaley Bridge & we cruised up to Marple & back. Remember the sweet sickly smell from Sizzlers

Hi Chris, I think the 'Phoenix' is still running as a day boat from Whaley. One man's sickly sweet smell is a lovely enticing aroma!!
Cheers for now, Tony and Helen.