I had a look around on the internet to see if I could find anything out about Woodend Lock. It seems that it was at Woodend Lock and it seems that in the famous case of the murder of Christina Collins by some of the crew of a Pickfords Packet boat first reported her loss to the Lock Keeper at Woodend Lock. It was the Captain of the boat James Owen who reported that she had drowned her self. He body was later found at the Trent aqueduct near Rugeley, called Brindley Steps, or now bloody steps. I must research the murder at some stage as it was massive news in its day, 1839. Just south of the lock Lichfield Council built a sewage farm and Woodend lock was where coal for the facility was transferred to road haulage. In 1885 the council bought Woodend Farm and by 1890 the farmhouse and buildings had become an isolation hospital. 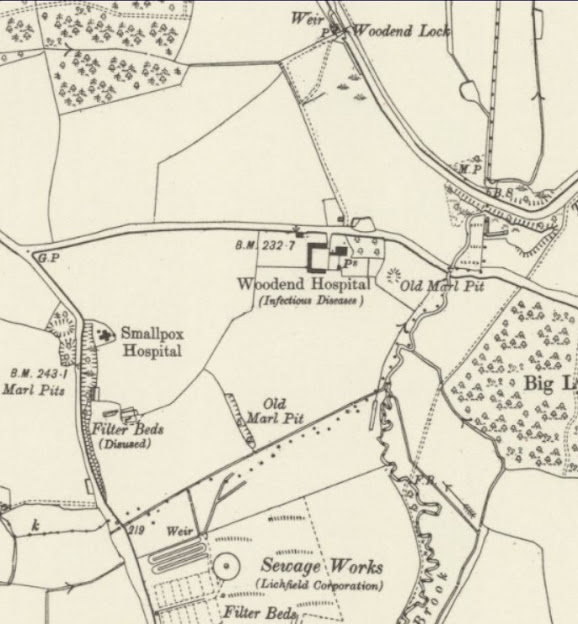 In this 1921 map extract Woodend Lock is at the top with the bend after the long straight from Shadehouse Lock off to the top right. Just south can be seen Woodend Farm now the Infectious diseases Hospital. To the left is the smallpox isolation hospital. This was an iron building built in 1904. I assume this means it was corrugated iron so that it could be easily disinfected. to the bottom is the Sewage Farm. Its early form was to take out the solids and then irrigate the fields with the rest. The resultant hay was cropped and sold. By 1920's you can see it was getting a little more scientific. In 1902 the engine driver (boilerman?) was evicted from the farm cottage so that it could be made ready for emergency isolation cases. As well as smallpox the main diseases were diphtheria, scarlet fever and typhoid. The main hospital was linked to the telephone system in 1920 but not mains water until 1924. In 1896 people who were sent to the hospital for the benefit of the rest of the public were expected to pay £2 towards the costs. This was felt too much for some, like a family that had three kids sent and the Council agreed to not impose the rule too strictly. Looking at maps of today it seems that the isolated smallpox hospital has gone but the main hospital/farm buildings look the same. It is said that during WWII the land was taken over by the air ministry and it was rumoured that aircraft were 'hidden' in the grounds.
The offside moorings above and below the lock may well have been put in by Swan Line cruisers of Fradley that had moorings for a boatyard and sales, although they are associated with Fradley more.

I was relieved the next morning to see the sick man from yesterday up and about this morning. He was thinking that he had a strain more than anything, but he and his wife had a long list of health problems so The truth could be anything. We re-emphasised that he should get checked out as soon as possible 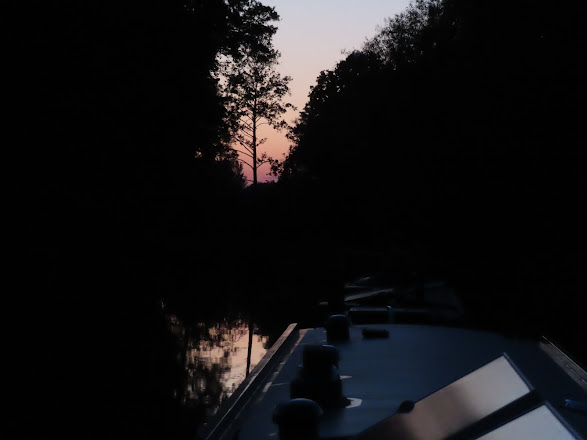 It was a lovely evening as the sun disappeared and 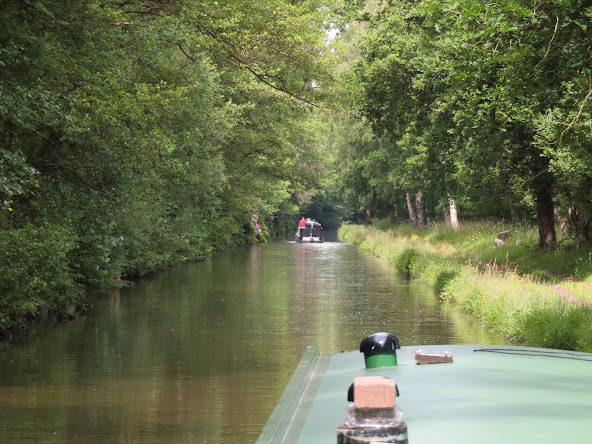 We helped a single hander up through the lock as we had just got ready to leave, but let him go first. The trip past Ravenshaw Wood is always good. That is him in the distance. 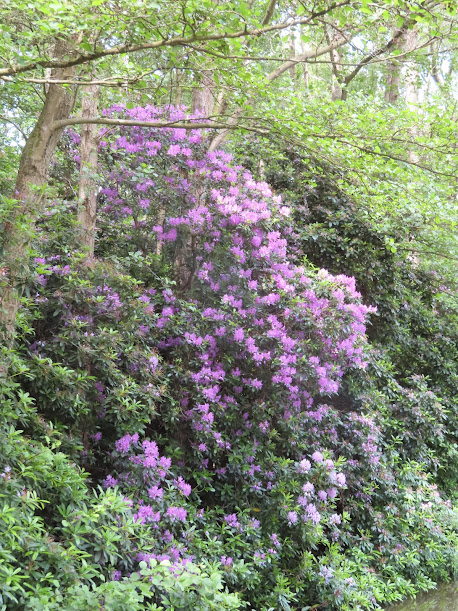 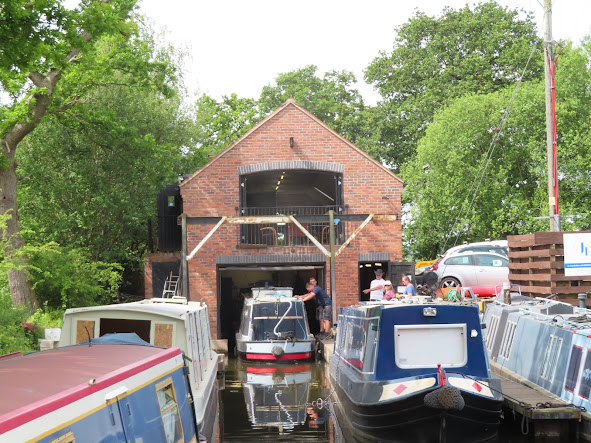 As we passed the boat yard before the bridge at Kings Bromley they were just pulling a boat out of the covered dock. It seems to be run by Jamie Franklin now and seem to do most things 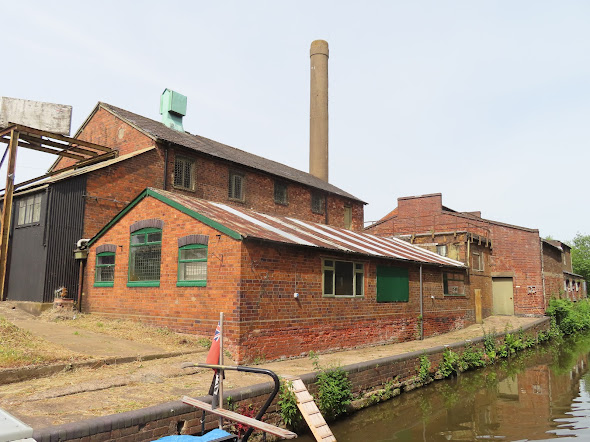 I don't think I have got a complete picture of the Kings Bromley Creamery and wharf. I suspect that there are plans afoot for the place. 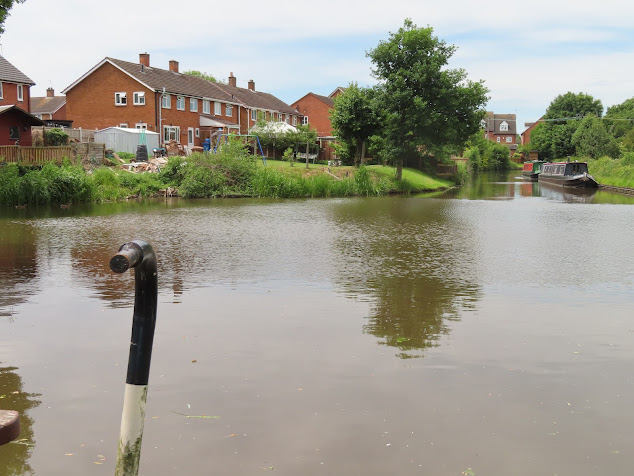 We decided head to Handsacre and wind there. As it was we backed down past the moored boat and 'parked' up. I rubbed down the painting that I had done the day before and touched up with another coat so that it would dry. Once we had done that we headed off for a walk. 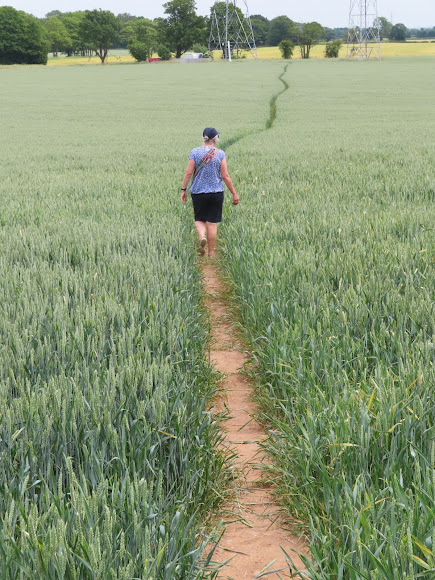 When we moored up here last week I mentioned that this path was inviting us to walk down it. This time we didn't resist and headed off down the corn. We were heading for Tuppenhurst Farm that lies between bridges 56 and 57. There is a little cafe that is open 10:00 to 15:00 and they do baguettes, baked potatoes, cakes etc and was very nice. They also have a B&B and there is a machinery museum. If you are around this weekend it is open for Father's Day. The collection is the lady of the farm's grandfather's that was passed to her father. She now opens the museum up on her father's birthday and Father's day in memory of her father. Look it up on Tuppemhurst Farm on Facebook etc. The Farmhouse is Grade II Listed and was built early 1700's and may be earlier at it core. The barn, now the cafe is a 17th Century barn conversion. 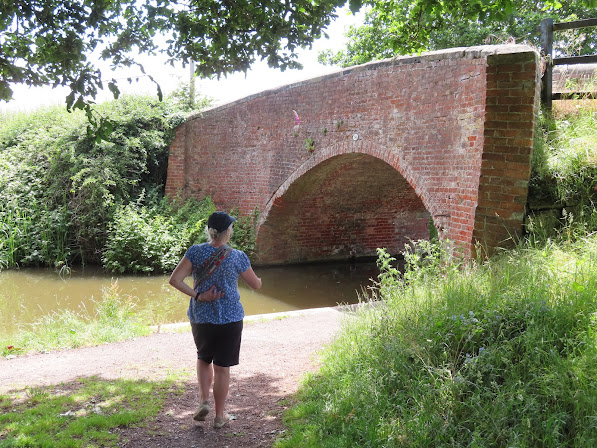 It was such a beautiful day and we walked back on the towpath. Bridge 56's red brickwork seemed to be soaking up the heat of the sun. 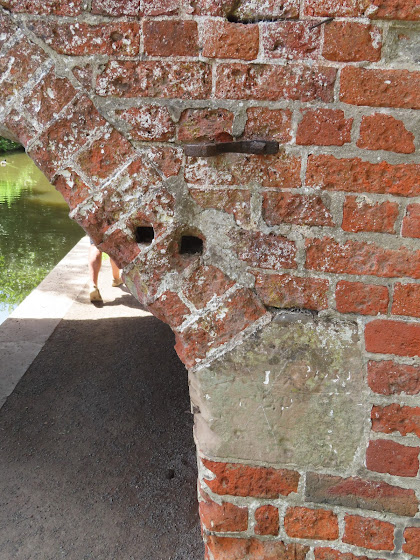 I had noticed on several other bridges the top bracket of the tow line roller, and her it can be seen and the two holes where the assembly was fixed to the bridge. 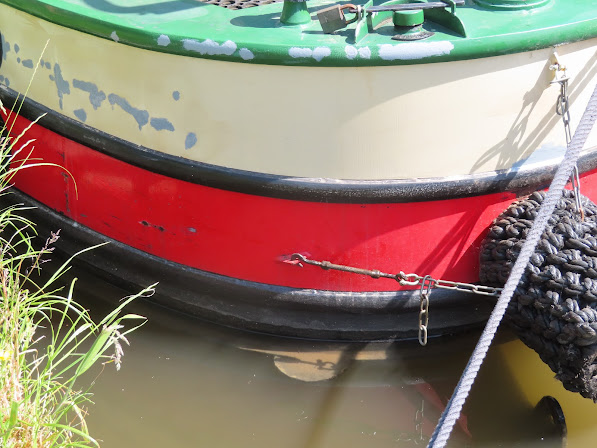 Following our blacking the tunnel bands really looked shabby so I have been touching them up ready to make them smarter. When I get it done fully is some time in the future. I find it hard to sit in one place long enough to do work on the boat as I like to move. But there is plenty to do on the paint work so I will have to make time.